You are here: Home / Health and Cancer / Betty Ford 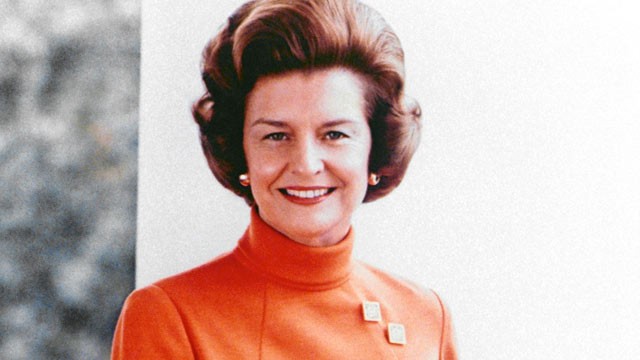 I followed her around one day  as part of a small group of reporters, as she knocked on doors campaigning for her husband in a suburban  Miami neighborhood.   She was so friendly, so natural, so  accessible; if you didn’t know who she was, you’d believe she could have been one of the local moms on the other side of the door, opening it and welcoming you into her home.   People liked her no matter where they stood on the political spectrum.

I don’t know if she changed any voters’ minds that day.

Her larger contribution was changing minds about bigger things.

It’s hard to describe, and remember how it was.  No one was wearing pink ribbons; no one was buying pink products; no one was marching; no one was raising money; no one was even talking about breast cancer— just in whispers.

In 1974, early in my TV days, I made a ground-breaking television documentary about it.  People were shocked that I found women with breast cancer who were willing to show their faces on camera.  A few months later,  one of the most famous women in the world changed all that—by announcing that she had a mastectomy.

It wasn’t as if the world sprouted pink ribbons overnight; that would come later.  But Betty Ford opened the door  by opening the eyes of the world to the disease that today strikes one of every 8 women.

Her courage in admitting her addictions was as stunning– and influential– as her revelation of cancer.  Again, her openness changed minds—and countless lives.

She wasn’t an idol–like an Eleanor Roosevelt or Jackie Kennedy.  She wasn’t a robotic adjunct to her husband.  She was something new in First Ladies—a woman who talked openly and honestly about her kids, her problems, her opinions.   She humanized the people living in the White House.

She seemed just like one of us–an ordinary woman—whose extraordinary contributions changed the world— for all of us.