You are here: Home / Popular Culture, Celebrities & Social Media / The Only Woman Writer on The Tonight Show
As Jay Leno bid farewell and handed over over The Tonight Show to Jimmy Fallon, I caught up with Beth Einhorn for this interview.  It’s well known that late night TV talk shows are a male-dominated field; and Beth was the only female writer on the Tonight Show with Jay Leno for three years. 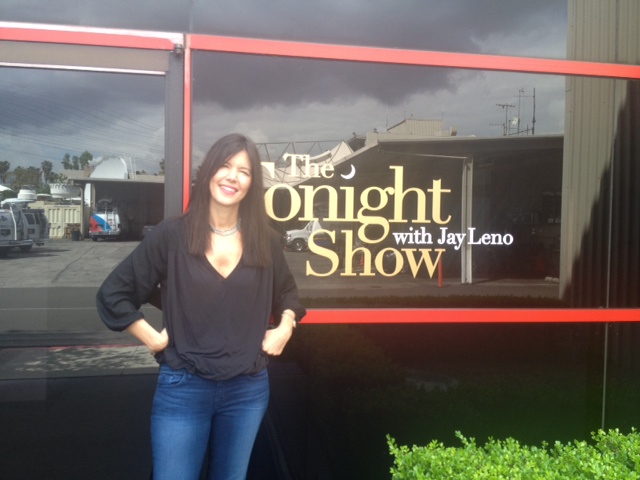 Q: You’ve worked as a Writer/Producer/Director on shows like Jimmy Kimmel Live, The Chris Rock Show, The Man Show, the George Carlin Specials on HBO, Saturday Night Live. Tell me about getting hired as a writer for The Tonight Show.

Like other shows I’ve worked on, it was people I’ve previously worked with, in this case, two writers at the show, Anthony Caleca and Andy McElfresh, who recommended me and got me in to meet the head writer. Adam Carolla also recommended me which was very nice. The head writer looked at my website and brought me back to meet with Jay, and I was hired.

Q: There haven’t been many women in that job.

Yes, I think in the history of The Tonight Show there have only been six female writers since the beginning with Steve Allen. That is what someone told me so don’t quote me on that. I do know that three of those female writers were named Beth. I told Jay in my interview that I changed my name to Beth to get the job.

Q: And how many male writers were there?

19 male writers and me. I remember my first writers’ meeting in the conference room and looking around and thinking wow – I am the only woman here.

Q: What is it like being the only woman?

Comedy is subjective. If you look at my writing – I don’t think you would be able to say that a woman wrote that or a woman directed that. I just go with what I think is funny or what I like. I am not writing as a woman. I’m just writing.

Q: Was your writing geared toward The Tonight Show sensibility?

I think what I wrote at The Tonight Show would be stuff I would have done for other shows. I like to have fun in my pieces. I also believe that if you are honest in your comedy the audience will see that. Throughout my life I have found that I love observational comedy. And if you are honest about what you are observing that will resonate with people watching. If you look at my pieces, besides Jay being in them I’m not sure you would say those are so Tonight Show. I do think, however, that different places do take different chances. What I wrote for Funny or Die probably wouldn’t make it on The Tonight Show.

Q: Is there a memorable experience being a female in comedy that stands out for you?

Well, one that stands out to me; my first week on The Man Show, I was directing a piece called “Adam and Jimmy go to the Sperm Bank.” I had just started and didn’t know Jimmy Kimmel or Adam Carolla at all. The idea was that Jimmy and Adam would go to a fertility clinic to check their sperm count and mobility. They wanted to set up a competition for them to masturbate in separate rooms (thank god) and see who could finish the fastest to get the specimen to be analyzed. Just so you know, this is not how I ever saw my life.

Q: I have to ask the standard question: Are women as funny as men?

Q: Who are your comedy inspirations?

Woody Allen is my favorite filmmaker of all time. I have watched his movies over and over again. And no, I’m not going to comment on what is happening right now. All you have to do is watch his movies and know that whatever the truth is – it is somewhere in every movie he has made.

Q: Who inspired you most personally?

Chris Rock. Working with Chris for three years really showed me so much, like how to work with people in the field. You never make fun of people. You have fun with people. That was a tremendous influence that I have taken with me ever since.

Q: What’s your favorite Tonight Show piece that you created?

My favorite was one I created and directed called “Magic Clerk.” I went to the Magic Castle one night to see a friend perform, a magician named John Carney. On the way home I thought; wouldn’t it be fun to go into a convenience store and have the guy behind the counter be a magician without the customers knowing he’s a magician. So I pitched it and we hired a magician and it became one of the most successful ongoing segments on The Tonight Show. In the past month when they showed some favorite pieces from the past 22 years, I was happy that Magic Clerk was one of Jay’s favorites.

Q: What will you take away from being a writer on The Tonight Show?

It was an amazing experience to be part of such an institution and I will always be grateful to Jay for giving me the opportunity. I never thought when I was a little girl watching The Tonight Show with Conan O’Brien that I would one day be the only woman writing on The Tonight Show with Jay Leno.

To see Beth’s writing and directing, visit her website betheinhorn.com