I’m constantly astounded by all the formulas and fillers and surgeries and suction and other stuff women do in desperation to drink every last drop from the fountain of youth.   So it was a rare treat recently to see a woman on a movie screen who’s  over a certain age—and actually looks it.

It’s NOT a surprise —that the movie was a documentary.

It IS a surprise—that it’s The September Issue—-the film about Anna Wintour,  editor of Vogue.    A  magazine so far from anything resembling reality—seems like the last place you’d find a real woman who looks her real age.  And I don’t mean Anna.   If you have seen the film, you know I mean the real star of the movie—- my new role model: Grace Coddington. 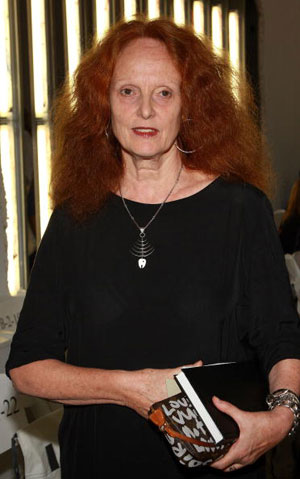 She sticks out like a sore thumb—in the movie and in real life.

I admit I was captivated— just seeing another woman my age with more hair than I have.

But it’s not just the wild red mane.  Grace has it all.

Talent—- a former model who is now  the creative director of Vogue.

Power—-in a tough business, she’s managed to survive and get the ear to the throne. 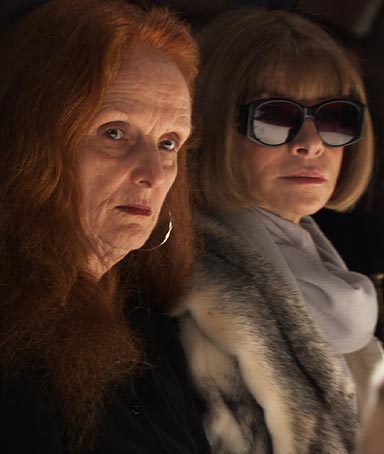 Confidence:   Living inside a fashionista’s fantasy,   swimming upstream in a sea of Botox,  not to mention working with Anna,  Grace has undoubtedly earned every crease.

Comfortable shoes— She might be the only woman at Vogue who doesn’t have an intimate relationship with a plastic surgeon and a podiatrist.

Whether you’ve seen the film or not, (click here if you haven’t) I think women owe a debt of gratitude to anyone who demonstrates what it means to age Grace-fully.

P.S:  V and I saw this movie a couple weeks ago and haven’t discussed it since—but Grace has been on my mind.  So tonight I write this post,  then get dressed to  go out to dinner—in this offbeat jacket I never wear.   V has no idea what I wrote;  but when he sees me,  he remarks that the jacket looks like something Grace Coddington would wear.

V meant well;   but trust me, Grace would never be caught dead in my jacket.   Still,  I take this as  another sign from the universe— letting me know I’ve achieved my own state of Grace.