You are here: Home / Chocolate & Other Food for Thought / Where's the beef?

It’s practically all I heard about before I arrived:  in fact this was the first picture I took in Argentina. 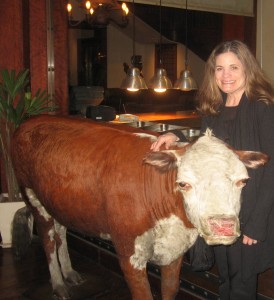 Argentines are mad for cows.  And I can appreciate why—since I can also appreciate a great steak dinner.

I’ve already had several— including  at La Cabrera, probably the most popular restaurant in Buenos Aires—- I could easily go overboard describing the meal— as I went overboard eating it.

On the wall in my line of vision is where I draw the line: 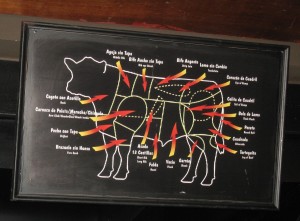 You want to know all the parts of the animal when you’re going to eat all of them.   And though I have nothing against local custom,  I’m not planning to try the authentic barbecue which includes body parts like small intestines and kidneys and testicles parts I don’t even want to know people would eat.  On the menu it’s called “offal” and to me, it sounds like it sounds:   awful.

Here’s a quote from a website describing a typical Argentine asado (barbecue):

My favorite part of cattle here is not edible—the leather  is as fabulous as it was billed to be.   With apologies to vegetarians—I’ve spent a lot of time involved in Argentina’s cattle industry—either eating something or looking at  something made from it.

But leather and beef in Argentina is no  big news.    The shocker for me is that  no one fully described the other mainstay of the Argentine diet:  technically also a cow by-product but far more irresistible than beef or leather.

Argentina will live in my heart forevermore because of these 3 words:  Dulce  de leche.