There’s a lot of finger pointing lately aimed at helicopter parents—guilt served up by a new study indicating their children grow up to be neurotic (there’s a real scientific breakthrough….).

The flip side is Free Range parenting,  personified by the Manhattan mom attacked as “the Worst Mother in the World” after she let her 9 year old son ride the subway alone  (which I would still not allow my adult children to do …LOL).

What’s a parent to do?  Having been there,  I can get both sides.

Pretty much every Jewish mother could qualify as a helicopter parent.   Although they didn’t call it helicopter parenting back in my day– since helicopters hadn’t been invented yet. (that is a joke, people)   We used a different word to describe it:  neurotic “overprotective” –and yeah, I was, too—(See “Uncontrollable Mothering.)

I was  forced to land the helicopter when I got cancer.  So cancer could technically be viewed as good news/ bad news.  The good news being that my two kids turned out to be pretty good pilots on their own.  Following my version of Free Range parenting helped them turn into two responsible adults.

Although probably I still harbor a few leftover helicopter parts.  Like– I think even adult kids should provide their parents with hourly daily regular updates on their lives.

For example, my son– currently studying in Argentina.   Everyone  knows I totally trust Daniel’s maturity and judgment.  So when he’s out of touch—as he was recently for a few days, I try not to don’t worry.   When he did call, I was kind of surprised to learn he was at the most benign of places:  the zoo.

Noticing he mentions this AFTER the fact and not BEFORE— I assure him– NO worries.   Until I find out there were also  NO zookeepers present, NO trainers, NO leashes, NO rules—and the visitors at Lujan Zoo go by themselves inside the cages.  NO kidding. 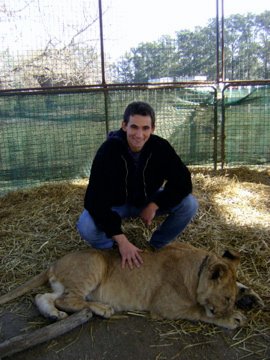 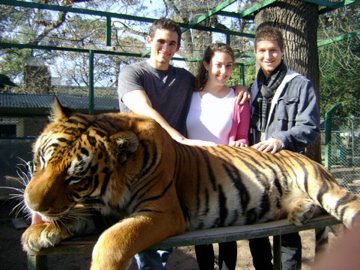 Lions and Tigers and Bears, Oh, My!

This is what you call  Free Range Kids: The Sequel.