I’m over the angst.   Both my kids’ educations are ongoing—and I’ve been educated, too.    I’ve learned to go with the flow and not to get all emotional about it.

Did I really say that?

Actually, I did— just a couple days ago, right here.

And I’m about to eat my words.   Or at least take a small bite. 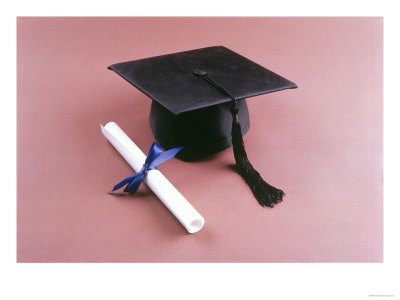 I feel a tiny bit hypocritical claiming I’m not emotional about my kids’ education.    I did confess to the kindergarten hysteria.   But that wasn’t the last act of the drama.   I really drove my daughter——and myself—crazy over college.    If you don’t know the story, you can read it here.    With an update here. And here.

That last update was earlier this summer, when Alli enrolled at UC Irvine to finally finish her undergraduate degree—- after an odyssey that took her from northern California to Texas and back—attending as many colleges as Sarah Palin—now 7 years after her high school graduation (and more than 7 years taken off my life).

So I wrote this sweet little post .   I could see the diploma at the end of the tunnel.  Finally I could relax, knowing Alli would get a degree from a great institution, the University of California.     Life was good.

Until Alli punctured the happy little bubble I was living in.

She’s a great writer, and I wish she would tell this story herself.    But she’s way too busy— working fulltime at her job and going to school fulltime at night.    It’s a punishing schedule only Alli could handle.    Then again Alli has never chosen the easy way to do anything.  And she isn’t about to start now.

So here’s the latest.  A week or so after she starts at UC, she decides she doesn’t like it.   She’s going to give back the money they’re paying her and switch to California State University at Fullerton—to a satellite of the main campus.   She’d rather be around other students  who go to class at night and work during the day—-in other words,  non-traditional students.   She doesn’t care that her new campus has only two buildings rather than the many manicured acres of UC Irvine; she prefers the feeling of a community college.

“Go ahead and shoot me now,” is what I would have said 10 or even 5 years ago.   She would have heard my protests way down in Orange County.

But not this time.  This is the new me—educated and evolved.

I hear her new plan.  I admit, I get a tiny bit emotional—my heart skips a beat.  Or two.   But I don’t scream—and I don’t cry.   And I don’t lecture.   ( OK— I might have briefly mentioned the value of a UC education and its higher academic ranking and how much easier it is with a UC degree to get into graduate school.)

So I know when to shut up.    And then I do what it took me almost 25 years to learn:  Over the phone as I listen to Alli, I smile—even though she can’t see me.   And I tell Alli that I trust her judgment about what she wants to do and I know she will do what’s best for herself and whatever she chooses to do, I am happy for her and I know she will be successful.

And here’s the best part:  I mean every word I say.